Edit
watch 01:36
We're Getting Mutants in the MCU - The Loop
Do you like this video?
Play Sound

Unheard of until the official declaration of Phoenix, she is a co-founder with Angel. Her name encompasses her personality, as she has been known to become easily disgruntled by the pace at which advancements are being made.

Ice only appears if the difficulty is set to Ultimate, which is done by setting the difficulty first to World Champion and then pressing the right key 20 times. This sets the difficulty to Deadly. Pressing the keys O, M and F and pressing right once more unlocks Ultimate difficulty. The player has to defeat any of the default ten opponents in the Fire Pit stage, perform a destruction followed by the HAR's Fire/Ice move. Now the player will face-off against Fire. Destructing Fire and again performing the Fire/Ice move unlocks Ice.

Ice is fought in an unique blue version of the Fire Pit. Due to a permanent engine condition Ice's Shadow is transclucent, and the shadows released are a little darker than the HAR itself. Ice has all the hidden upgrades for the Shadow HAR, meaning the shadows are faster and Ice Freeze move is unlocked. Any move performed while fighting Ice have a x50 points multiplier. 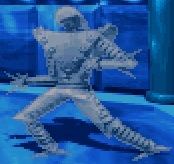